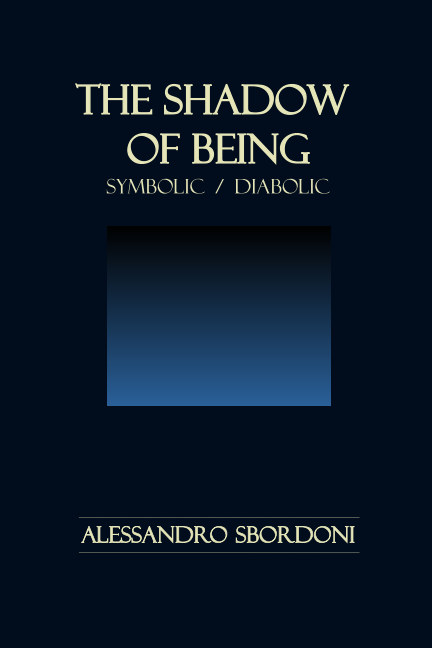 The Shadow of Being

“If the diabol could speak, what would it say? When symbolic life fails – and, with it, failing the reality of being – the diabolic emerges in its shadow – the hidden reservoir of existence. Alessandro Sbordoni’s poetic-theoretical dialogue probes the edge-lands of language to give the diabolic form and potential, a hesitant dance between destruction and hope.”
D-M Withers, University of Reading

“Beautiful that this book is written. As shadows may move swifter than lightspeed, even though nothing can, Shadow of Being’s diptych-discourse falls like a butterfly in the void, fluttering in silence almost faster than thought, always a little further down the fissure of the word only to land, not nowhere, but in the very fold between absence and presence that has already turned out to be everything – the fact itself.”
Nicola Masciandaro, City University of New York

“This book is a very interesting exploration into the entrails of absence that makes the symbolic possible. It is also a beautiful experiment in duality where, instead of a contrast between the poles like in an antinomy, there is a continuity, a coming-and-going, a ressassement. There is no interruption except that the saying itself changes polarity.”
Hilan Bensusan, University of Brasilia

“Martin Heidegger’s Being and Time and Jean-Paul Sartre’s Being and Nothingness loom over Alessandro Sbordoni’s philosophy like two shadows… Above them, an iridescent cloud. Its name, mysticism.”
Alessandra Cislaghi, University of Trieste

Following the tradition of thinkers like Jacques Derrida, Maurice Blanchot, and Emil Cioran, this book is about the failure of language and its re-presentation as failure-in-itself. On the one hand, language is laceration, the sign of the diabolic. The impossibility of the return of being to itself: the dark light of hell. On the other hand, language is the triumph of the simulacrum, its own purified image, the burning mark of integration: the symbolic, the red light of a cursed sun.